Indian batsmen have once again been found wanting in the pacy and bouncy tracks of South Africa. The lack of dry surfaces meant their spinners could neither be among the wickets nor apply brakes on scoring during the middle overs. The result is India trailing 2-0 in the 3-match ODI series. This is the first series loss for India since 1-2 loss against arch rivals Pakistan at the start of this year. In between they won 6 tournaments including the ICC Champions Trophy in England. It’s not just the score line which is worrying the fans & management alike but the margin of defeats in the 2 games so far. India lost the first ODI at Johannesburg by a whopping 141 runs and the second one at Kingsmead again by a huge margin of 134 runs. The latter one was their sixth loss to South Africa in as many matches at the venue.


In this week’s article we look at the instances of consecutive losses in ODIs by a margin of 100 or more runs.
﻿

# The last ODI of the Sri Lanka - New Zealand series was abandoned after the toss. 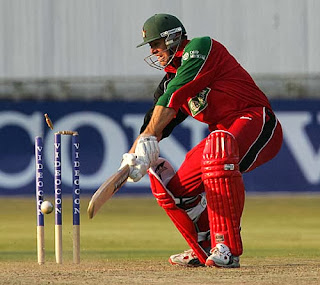 Zimbabwe during one of those hammerings...


* 7 times the feat spanned across 2 tournaments. It occurred once in World Cup and thrice in Champions      Trophy.


* South Africa was the most ruthless when it comes to inflicting the defeat upon opposition with 5 times.


* Zimbabwe is the only side to lose 3 consecutive ODIs by a margin of 100 runs or more.


* Zimbabwe also had lost first match of the series against New Zealand by a margin of 90 runs.


* Zimbabwe’s 3 consecutive losses spanned over a year, which is the most for this record.

* Zimbabwe (twice) and Bangladesh are the only 2 teams to lose by a margin of 150 runs or more in    consecutive ODIs.

* New Zealand (114 runs) and Bangladesh (138 runs) are the only 2 instances of loss by identical margins.