An eventful 2013 got wrapped up and 2014 has arrived. And what a start to the first test match of 2014 at the SCG – a pure delight from a statistician’s point of view. So many records happened on the first day’s play in the final Ashes test of the 2013/14 series and in this edition of the Blog we will look into all of it.


Australia have the wood on England right from the first test at Gabba. And they have been relentless too. As a result they are leading the series 4-0 coming into this test. Only 4 times has Australia went into the 5th match of an Ashes series with a possibility of a 5-0 whitewash. Twice they managed to inflict the humility on Poms and twice England managed to get salvage some pride just by the skin of their teeth.


Ashes Series in which Australia won the first 4 tests

Australia have went in with the same XI for all the 5 test of this series – a testament of their form and fitness, especially for players like Ryan Harris & Shane Watson, who remained injury free throughout the whole series. It’s only the 4th time in history a side has played with an unchanged XI for all 5 tests of a series and just the second time in last 100 years. England also played with an unchanged XI for the first 4 tests of 2005 Ashes series in England, where the regained the urn after 18 years, but was forced to replace an injured Simon Jones with Paul Collingwood for the final test at The Oval. On the other hand England used 18 players in this series, which is the joint most for a touring side in a 5-test series. West Indies also used 18 players in their dreaded 5-0 series whitewash in the tour to South Africa in 1998/99.


Teams playing same XI in all 5 tests of a series

England are fielding 3 debutants in this game – batsman Gary Balance, leggie Scott Borthwick & lanky Irish Boyd Rankin. This is just the 2nd time since 2000 England are fielding 3 debutants in a test. Last time it happened was Against India in Nagpur when the current captain Alistair Cook made his test debut alongside Monty Panesar and Ian Blackwell. Since then Alistair Cook has just missed a single test in his whole career spanning over almost 8 years, which was the 3rd test of his debut series due to a stomach upset. Today he became the 4th player to play 100 or more consecutive tests for a team.


Most consecutive tests for a team


England are fielding 8 left handers in this match which is the joint highest for a test along with WI against Pakistan at Guyana,2000 and WI against England,Oval,2000. In the WI vs Pak test of 2000, 8 of the top 9 were lefties, the only right hander being Sherwin Campbell. However all the lefties of England are right arm bowlers.
England landed in Australian shores with hopes of a 5-0 whitewash but they were caught off guard right from the first test at Gabba. Who has been the man from Aussies responsible for this unexpected – David Warner for his explosive innings at the top? Or Mitchell Johnson for instilling fear and skepticism in English batsmen’s mind? Or a combined team effort under the ever outstanding skipper Michael Clarke? For me the most important man for Aussies in this series has been their man behind the stumps - the 36 year old Brad Haddin. Not only his glove work has been impressive but he has bailed out Australia every time they were under trouble. He came to the crease with scores on 100/5, 257/5, 143/5, 112/5 and 97/5 and has always bailed his team out with his aggressive and calculated batting.

Most runs for a wicket-keeper in an Ashes series

Fifties in all 5 first innings of a series


Haddin is also no. 2 on the list of maximum runs scored at No.7 position in a series behind Adam Gilchrist’s 473 against SA in 2002/03.
Australia's sixth wicket put together a century stand for the 3rd time in this series. This is only the second series in which their 6th wicket has had 3 century partnerships. The last such instance came in the Ashes in 1920-21 when Warwick Armstrong’s Australia won the series 5-0. 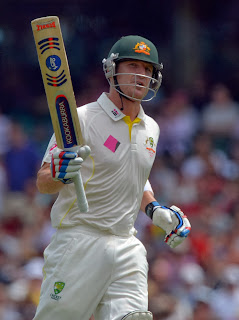 
In a series of massive drubbing one of the rare positives that have come out for England is the emergence of the young all-rounder Ben Stokes. He scored a valiant second innings century at WACA and today he took his maiden 5-wicket haul in tests. He became the 5th youngest overall visiting bowler and 3rd youngest (22 years & 213 days) Englishman to take a 5-wicket haul at SCG. He is the first English bowler to take 6 wickets or more at SCG since Andrew Caddick’s 7/94 in 2003.
Michael Carberry’s wicket was Mitchell Johnson’s 32nd of the series, drawing level with England’s Frank Foster’s 32 in 1911/12 Ashes in Australia. He is 6 short of the all-time record of 37 wickets by WJ Whitty against SA in 1910/11 – a record which he should be holding at the end of the series given his current form.


Most wickets for left arm bowlers in an Ashes series