Well… It’s all done and dusted now!!!! Two months ago the English squad arrived in the Australian shores with high hopes of winning their 4th consecutive Ashes series and perhaps with their best chance to win it 5-0. But cricket is a game known for its glorious uncertainties and the outcome of this series is a testament to that old saying!!! In this edition of the blog we will look into all the runs and ruins from Ashes 2013/14.


This series was the first time ever Australia played with an unchanged XI for the whole series of 5 tests or more - a proof of their form and fitness. Also it’s the first instance of a side winning all tests of a 5-match series with the same XI players.


Teams playing same XI in all 5 tests of a series

The 5-0 whitewash was the 3rd such instance in Ashes history with England at the receiving end all the 3 times. All the 3 whitewash took place in Australia and it’s the 2nd time it occurred in the last 3 Ashes series held in Australia.


Australia averaged nearly 20 runs more per wicket that England. In fact England’s average runs per wicket of 21.58 is their 3rd lowest in an Ashes series since 1900. All from top 7 but George Bailey scored hundreds for Australia. . 4 Australians scored 2 hundreds each in this series which is a first in Ashes. Australia mange to convert 10 of their 25 fifty plus scores to a century whereas England’s lone century came from the new comer Ben Stokes in the 2nd innings at the WACA. England’s tally of one century in the whole Ashes series is the 2nd lowest for them in the last 100 years. (None of the English players scored a century in the 1972 Ashes, highest being Brian Luckhurst’s 96). On the other hand Australia’s tally of 10 hundreds in the series is the joint most for them in an Ashes. None of the English batsmen scored over 300 in the series and only Stokes averaged above 30 (34.87). England was dismissed below 200 for 6 times in their 10 innings while England could dismiss Australia only 5 times in 10 innings. England was dismissed in a mere 31.4 overs in the second innings at Sydney which is the second least they batted in a completed Ashes innings in the last 100 years following their 28.2 over surrender at the Gabba in 2002/03 series. 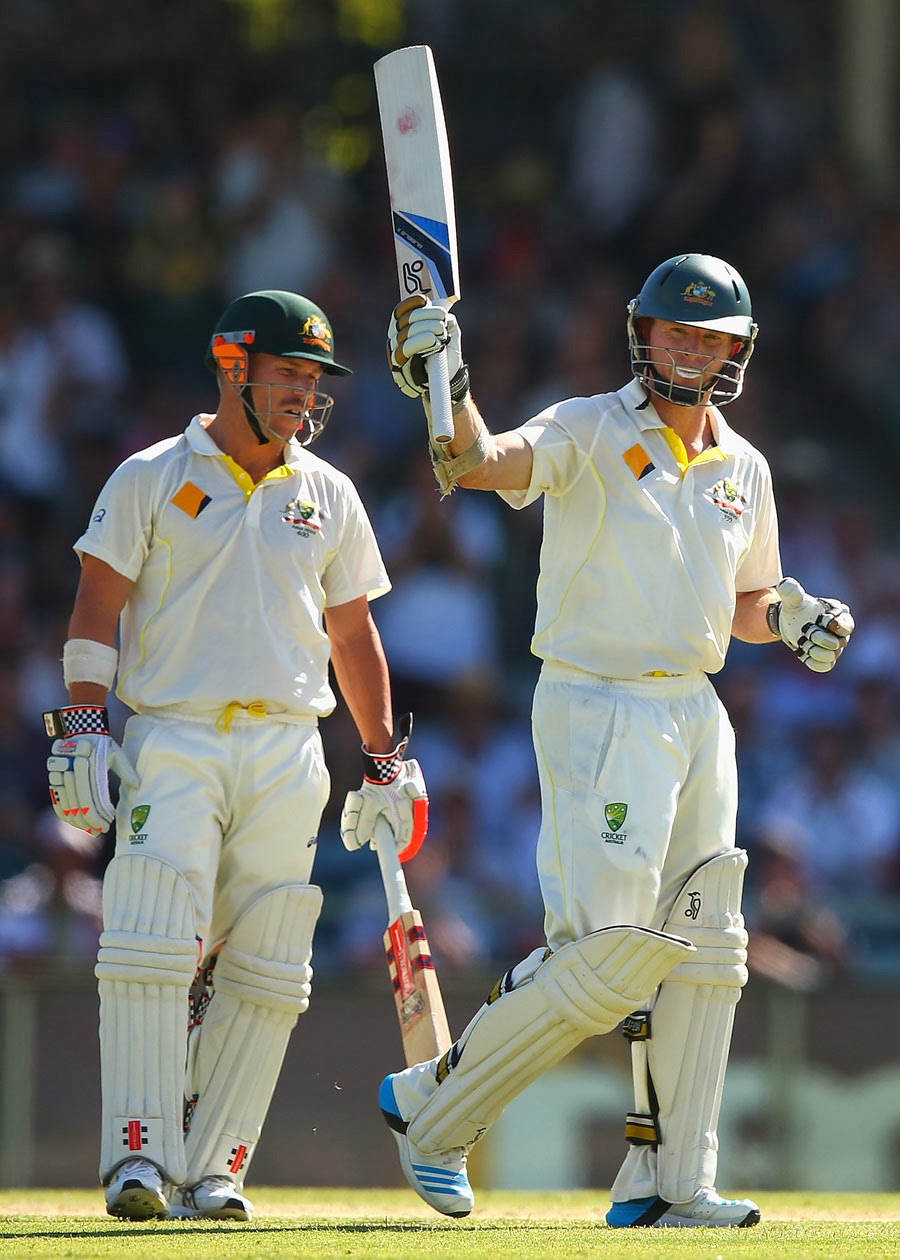 Warner & rogers : Complemented each other very well and gave Australia good starts more often than not
Most runs in the series

Australia averaged more than England in partnerships for all wickets and also scored runs at a faster pace for all wickets except #8 (Eng’s 5.07 to Aus’s 4.40). England managed just one century partnership the whole series – Pietersen & Root adding 111 for the 3rd wicket in the 2nd innings at the Adelaide Oval whereas Australia had century partnerships for all wickets down to #7 except for the 4th wicket, mostly because of Bailey’s indifferent form with the bat compared to the rest of his team mates. England averaged above 30 only for the 3rd wicket stand (30.50). Australia averaged more than 50 for the 6th and 7th wicket with a total of 4 century partnerships. Australia recovered from positions of 132/6, 257/5, 143/5 and 97/5 because of their strong lower middle order lead by Brad Haddin and ably supported by Johnson, Harris & Siddle. Haddin scored 493 runs in 8 innings at 61.62 and a strike rate of 71.55 with a century & 5 fifties. He now holds the record of scoring most runs in a series at no. 7 or lower, most runs in a series for a designated WK, most fifties in a series by a WK and scoring 50 or more in each of the 1st innings of all 5 tests of a series.


Most runs in a series batting at #7 or lower 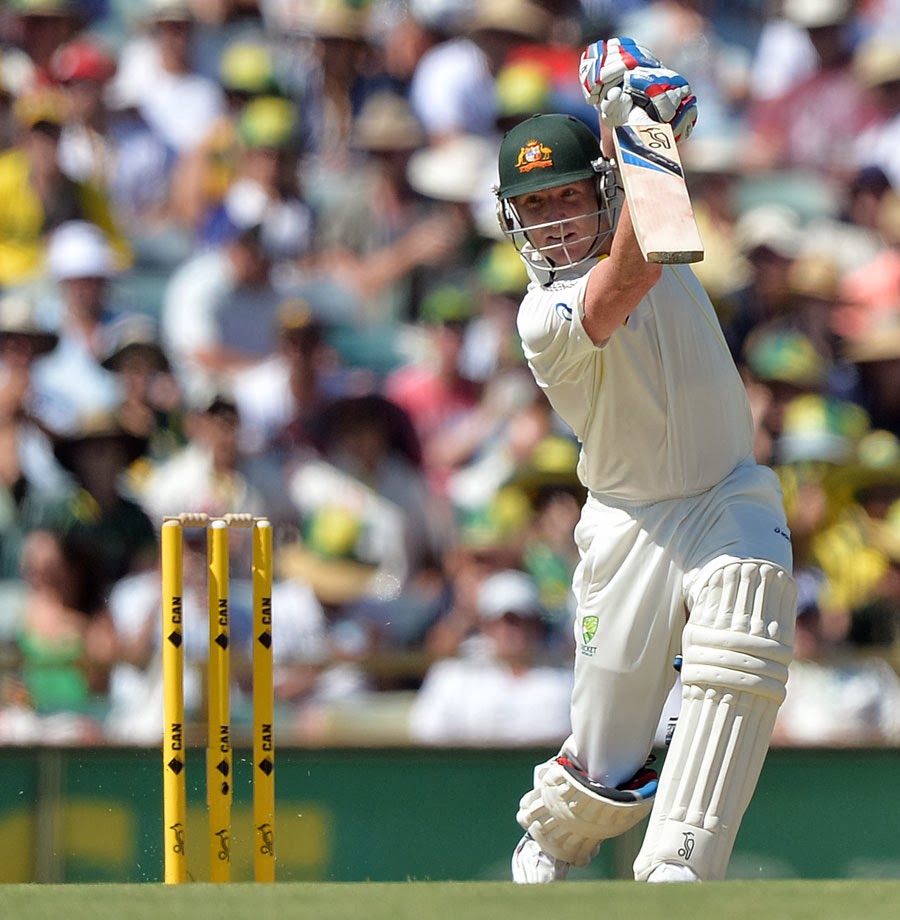 Brad Haddin : The man who was rescued Australia every time when they were in trouble﻿
Bowling

The bowling and batting averages of Australia and England are almost the reverses of each other. The difference between batting and bowling averages for Australia is +19.09 and for England is -21.67. The trio of Johnson, Siddle & Harris was relentless and hardly bowled a poor spell among them. England’s main strike bowler James Anderson averaged 43.92 per wicket at took a wicket every 13.5 overs (to Johnson’s 13.92 at a wicket every 5 overs).  Stuart Broad well in most parts of the series but lacked the support from other end to keep up the pressure. England picked 4 seamers standing over 6’5” tall for the series but Broad apart, the other 3 played just 2 tests among them. Aussie paceman average 18.35 per wicket which the best for them in an Ashes since 1890.


The bowling average of 30.80 for Aussie spinners is the best in an Ashes series since Shane Warne’s retirement. The averaged less than half of their English counterparts and struck once every 9 overs to England’s 18 overs.  Both Swann and Panesar averaged above 80 per wicket while rookie Borthwick took 4 wickets in his only test  but they came at 6.30 runs per over.


Most wickets in the series

All the Australian seamers went for less than 3 an over while none of the English counterparts did the same. Johnson was so lethal in this series underlined by the fact the only 2 English batsmen averaged above 20 off him (Pietersen 48.50 & Carberry 27.66). Captain Cook scored 766 runs in the last Ashes in Australia at 127.66. This time he failed to get past 100 even once. His struggles earlier on against Johnson and Harris accounted for England’s misery at the top of the order. Ryan Harris averaged 6.66 and 9 against Cook and Pietersen respectively dismissing them thrice each. 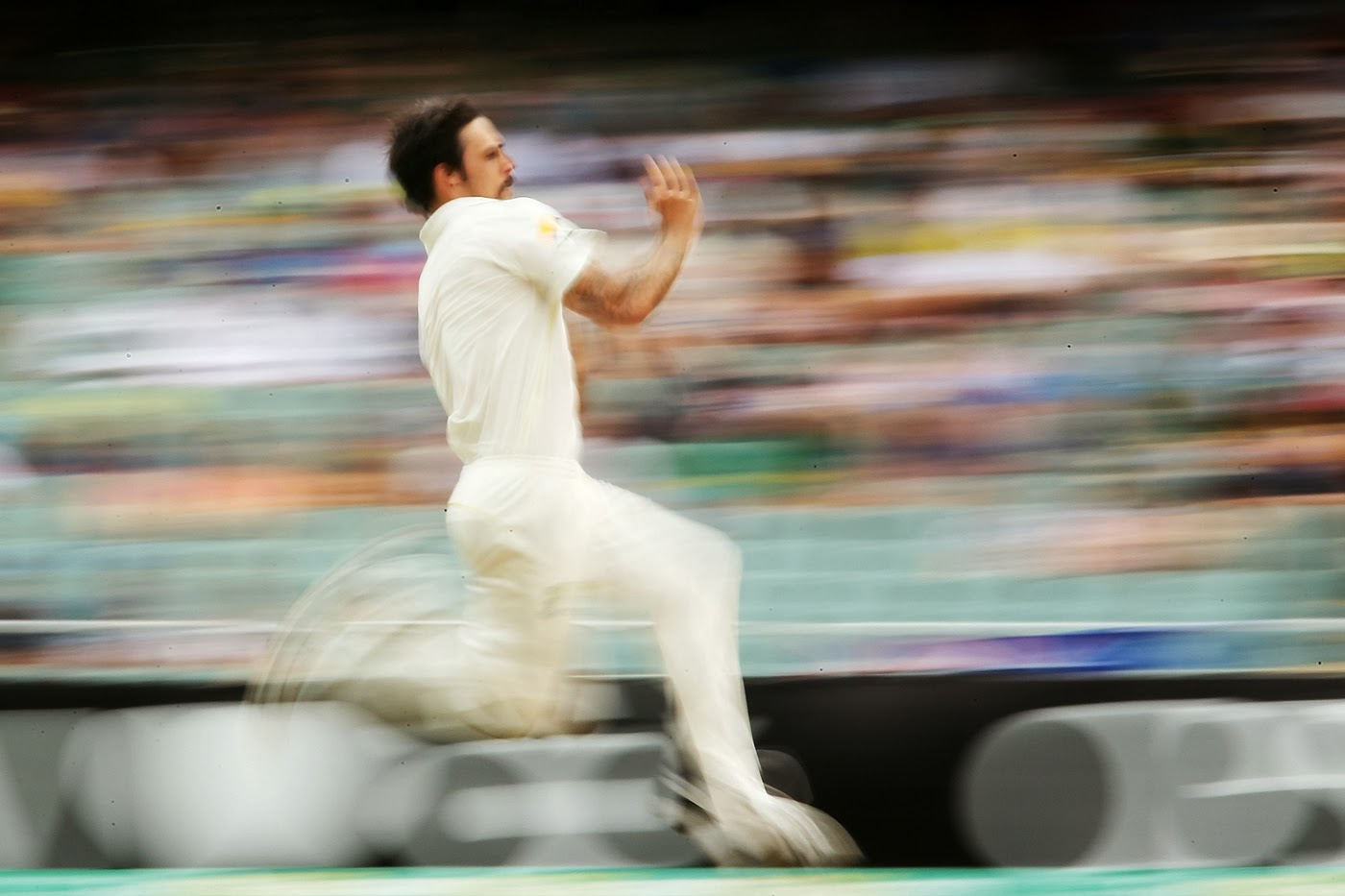 Australia under Michael Clarke have made one of the greatest comebacks in the history of cricket and their next series in South Africa is now one which cricket fans across the world would be having their sights set on. Dale Steyn vs Mitchell Johnson – one of the contests to look forward to in 2014. For England it’s time to ponder over what went wrong and to make some fresh changes.


A cartoon from @satishacharya during the series. 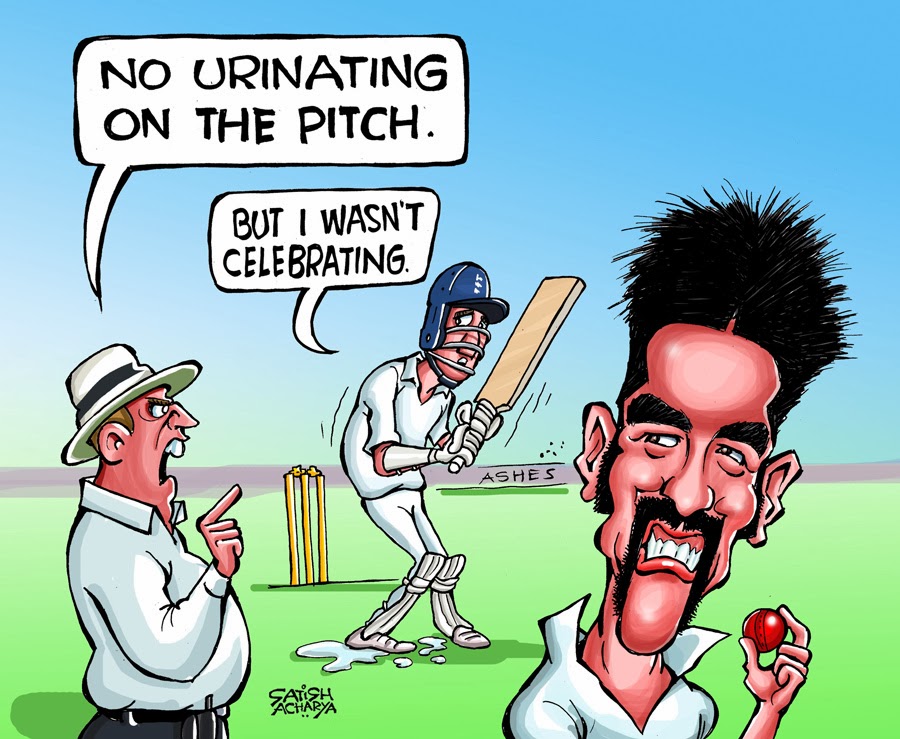 Posted by Deepu Narayanan at 02:36